Following a great thread in the finished works section of the forums, Chris (blowback) was very kind to send me a ‘Making-Of’ article about the 3D modeling of the ground cover in the architectural visualization of  ‘Jeff’s House’. I hope you’ll enjoy this article and learn from it as much as I did!

Following a great thread in the finished works section of the forums, Chris (blowback) was very kind to send me a ‘Making-Of’ article about the 3D modeling of the ground cover in the architectural visualization of  ‘Jeff’s House’. I hope you’ll enjoy this article and learn from it as much as I did!

I started the process of modeling the ground with a simple plane, adding a displacement modifier to it. To the bitmap slot of that modifier I then added a Height map that I manually created in Photoshop. You can see the map I used below. To further adjust the shape of the ground surface I added a FFD Modifier to allow for general and quick adjustments. For more detailed deformation work I applied an edit poly modifier and then used the brush tool to paint those details in.

To blend it all together I add, at the end of all the little adjustments, a relax modifier. Once I got the ground shape I liked, I saved a copy of the un-collapsed stack, just in case, as a backup. I then converted it all to an editable poly. I did this so I could detach the polys that will make up the gravel path part of the ground. This also allowed me the freedom to raise the poly count and paint in some finer landscaping
details and adjust the other UVW maps separately. It also gave me the freedom to add a displacement modifier if needed to a smaller area of the environment. Now that I had the gravel path ready, I created the steps. The steps were made out of 3 copies of a chamfered box with some noise and varying settings that were then instanced around. I also added a few spheres for the massing of the larger leaf piles. Again, these were spheres with the FFD modifier added to them. 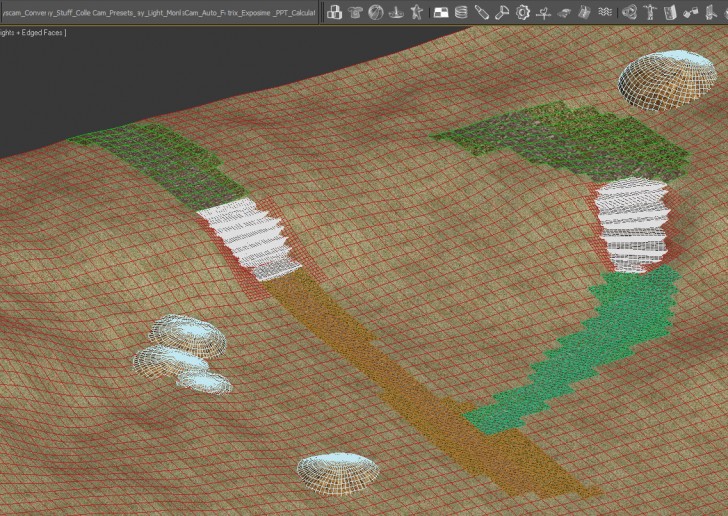 Creating the small stones was pretty easy. I started with a simple sphere, adding a noise modifier to it. I then add a FFD modifier, yet again, to drastically change the overall shape, making it look more stone-like. I made 12 copies of varying size & noise levels. Once I was happy with the small collection, I individually create VRay proxies of the stones, so they could be scattered on the path. I also created a few versions of the diffuse maps, just to stretch the randomness a little bit further. You can adjust your settings according to your needs as you go along. The Advanced Painter script is really powerful It has become a regular part of my workflow. 3D Studio Maxs internal reactor system was used to create the wood pile. I am new to it but it was rather easy. First, I modeled the wood parts. I created three shapes and then copied them multiple times. Setting the Physics of the Wood Pile Simulation.

Most of the settings are default with just some adjustments on the col. tolerance. Now click on the preview in window tab to bring up the preview window. You can now play your simulation until you like the results, or reset and adjust some of the physical properties to your liking. Once I was happy with the output I updated it to 3D Studio Max. I then manually adjusted some of the logs for to add that final touch. The grass was created based on Peter Guthries great two-part grass tutorial (part 1 | part 2). I will not cover that here, but I recommend you all to read that tutorial and visit Peters inspiring blog.

Once the grass clumps were made, I followed the same procedure as I did with the gravel. I loaded them into the Advanced Painter script and painted them on the ground surface.

Now that I had the grass in place I created 4 different leaves. These were made out of simple planes with a bend modifier and noise modifiers applied to them for variations. I then painted a couple different versions of smaller piles. The last step was to attach them to all together as one object. This is where you can randomized the material. These leaf piles could now be scattered around the scene to cover up the ground. I also had some single leaves that I changed the pivot point on to scatter as well. Overview of the model & finished render

All that was left to do now is to check all is placed correctly. And render the final image. Here is the always needed clay / wire render too…